This is Barcelona – facts, areas and entertainment

The largest European city on the Mediterranean coast and the second most populous city in Spain, Barcelona is an nearly inexhaustible source of attraction for all types of tourists.

Relaxation at the beach, high culture, remarkable architecture, sports and great food are just some of the goodies this vibrant, cosmopolitan city has to offer.

Here are a few facts about Barcelona:

Barcelona – geography
Barcelona is located in the eastern section of the Spanish Mediterranean Coast, in the autonomous community of Catalonia.

The city of Barcelona is divided into 10 districts:

Ciutat Vella
La Barceloneta Beach and Barri Gotic, the Ghotic Quarter, are the most popular amongst tourists parts of Barcelona’s Old Town

Eixample
Created mainly in the 19th and the 20th centuries, the Eixample district is home to several iconic works of Antoní Gaudí, amongst them the Sagrada Familia Church. This area of the city is known for its characteristic strict grid layout of the streets.

Sants-Montjuic
The westernmost district of Barcelona is worth a visit because of its beautiful Montjuic park and the wonderful panoramic views of Barcelona available from the Montjuic Mountain (accessible via cable car).

Les Corts
An important financial and business district of Barcelona, Les Corts does not boast many typical tourist attractions. The chances are, though, that you will be staying in one of the many hotels of this neighbourhood.

Sarria–Sant Gervasi
The largest of Barcelona’s districts. Do not miss out on the local Old Town, which preserved a peaceful, small-town-kind of a vibe, visit the CosmoCaixa science museum and have fun at the Tibidabo amusement park.

Gracia
The ‘artsy’ district of Barcelona, full of art galleries, street art, little squares and open air cafés – a great place to rest form the hustle and bustle of the more touristy areas of Barcelona. Parc Guell is the most obvious attraction of Gracia.

Horta-Guinardo
Quiet part of Barcelona, offering more economic accommodation and god public transportation links to the city centre. The labyrinthine park, Laberint d’Horta is a popular site in this area.

Nou Barris
The neighbourhood of the working class in the past, Nou Barris has undergone a radical makeover in the 20th century. The relaxed, low-key atmosphere remained, however. One of the greenest areas of Barcelona, Nou Barris is home to three large city parks.

Sant Andreu
A quiet, residential  neighbourhood with a few interesting architectonic landmarks, amongst them Calatrava’s Bac de Roda bridge and Casa Bloc, a perfect example of the rationalist architecture.

Sant Marti
Usually overlooked by mainstream tourism, Sant Marti is mostly a residential and not too affluent district, popular amongst the immigrant communities in Barcelona. Torre Agbar, a 38-story skyscraper, famous for its extravagant nocturnal illumination and the Olympic village – Vila Olimpica de Poblenou are the most recognizable landmarks of Sant Marti.

Barcelona architecture jewels
One of the greatest attractions of Barcelona is, without a doubt, the city’s unique architecture. The works of Autoní  Gaudí, scattered across the city, amongst them Parc Guell, Casa Mila, Casa Batlo and, of course, La Sagrada Familia Church deserved a place on the list of UNESCO World Heritage Sites. They are also responsible for turning Barcelona into one of Europe’s most popular cultural  destinations, sought after not only in the summer season, but throughout the whole year.

Curious fact:
The most iconic of Barcelona sights, the Sagrada Familia Church is, much like a large part of the city’s signature architecture, associated with Antoni Gaudi. It is not a commonly known fact, though, that the project of the cathedral was originally commissioned to Francisco de Paula del Vilar, who oversaw the first stages of the construction, in 1882. Gaudí joined the project and eventually took over, changing the design radically, only a year later.

Best city beaches of Europe
A few other cities in Europe boast as extensive and well maintained city beaches (beaches within a walking distance from the city centre) as Barcelona. The nearly mile-long and very central Barceloneta Beach is repeatedly ranked amongst the best city beaches in Europe. 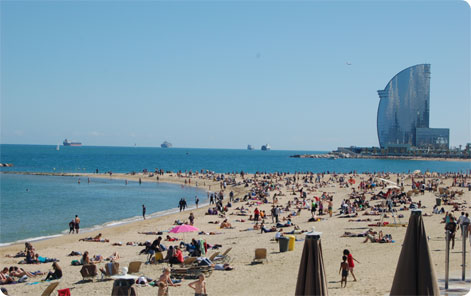 Curious fact: The majority of Barcelona beaches in the form as we know the today are, to a great extent, man-made. Despite the favourable location, in the 19th and 20th centuries Barcelona’s coast became occupied by the local industries, which ruined the landscape and greatly polluted the ground.

It wasn’t until the bet of hosting the 1992 Summer Olympics when the local authorities decided to revive Barcelona’s coast to boost the tourist potential of the city. The factories, by then shut down, were dismantled and the coastline was recreated with the help of sand brought from Africa, resulting in what today is considered one of the best beach locations of the Mediterranean.

Barcelona – exquisite museums and… football
Tourists on a cultural trip in Barcelona will face a difficult task of choosing the museums to visit during a short city break in the Catalonian capital.  Barcelona offers a very large choice of world-class museums, the majority of which is dedicated to the famous Spanish painters. Do not miss out on the Picasso Museum, Museu Nacional d’Art de Catalunhya (MNAC) and Fundació Joan Miró.

Curious fact: The most visited museum of Barcelona is dedicated to football. Spain loves football and FC Barcelona, or simply Barça, is worshipped not only in the city, but across all of Europe. The museum dedicated to the history of the club is located on the grounds of Camp Nou stadium and attracts over 1.5 million visitors per year. 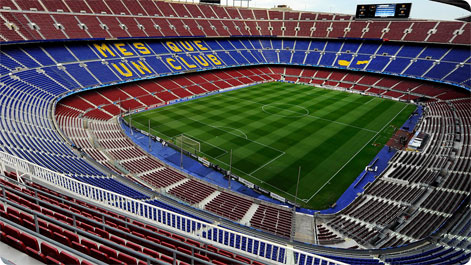 For many football fans, Camp Nou museum is a mandatory stop in Barcelona

Fine dining in Barcelona will not necessarily ruin your holiday budget, as in Dos Palillos prices of meals for one person start from 35 euros. Prepare to spend at least 100 euros per person, however, in for example, the 2-starred Lasarte.