Located fairly centrally in the Mediterranean Sea, the Italian island of Sicily is an epitome of the Mediterranean climate. Hot, dry summers and mild, wet winters is an accurate, yet very generic description of the weather conditions in Sicily. The largest of the Mediterranean islands, with the total area of nearly 10 thousand square miles, is very versatile in many aspects, amongst them also weather depending on the location. 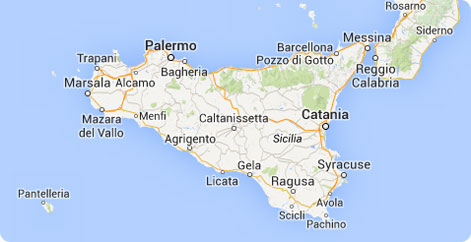 Sicily, the largest island of the Mediterranean.

The geomorphology of Sicily – the mountainous terrain with great altitude differences  as well as the influence of see currents and winds blowing from the Mediterranean – are responsible for many local climate variations.

In general, and as is a case of many island, the weather varies greatly between the coast and the mountainous interior. On a summer day, the difference in temperatures between a coastal resort and a Mount Etna slope can be of even 10 degrees Celsius, depending on the altitude.

Also, the southern and southeastern parts of Sicilly are usually warmer and drier than the remaining part of the island as the mountain range towering over Sicily’s northern coast acts as a barrier to the winds blowing from the north. The difference of 2-3 degrees Celsius between the northern and the southern Sicily coast is common.

Prior to travelling to Sicily it is always recommended to refer to a reliable source for  current weather conditions in a chosen location in Sicily. Below, we present a general outline of what weather to expect on the island during different seasons.

Summer in Sicily
Long summer season is typical for the Mediterranean climate. Although the summer as such comprises the months from June to August, already in May the daytime temperatures in the coastal areas exceed 20 degrees Celsius. August is the warmest month in Sicily, with average temperatures of 26 degrees Celsius. Once again, be aware of the local microclimates; while along the coast the temperatures may easily rise to 30 degrees, the hilly interior is much cooler.

Sicily lies less than 100 miles from the northern coast of Africa and the Sirocco, a wind blowing from the Sahara brings, at times, uncomfortable, scorching heat and arid air to the southwestern cost of Sicily during the summer months.

The sun exposure is excellent in Sicily and during the summer season around 10 hours of sunshine can be enjoyed while rain is extremely rare and limited mostly to the mountainous areas in the interior.

Be prepared that in the hilly areas the temperatures decrease considerably during the night and even during summer at least a light jacket might be necessary if staying overnight in the interior.

Autumn and spring – the shoulder season in Sicily
While during the summer and winter the weather is fairly stable in Sicily, it can be quite unpredictable during the short spring and autumn seasons.

Late September brings the perceptible difference in weather as the temperatures start dropping towards 20 degrees Celsius and the days become slightly shorter. In October, the average temperature in the coastal areas of Sicily is of 17 degrees Celsius; in November, around 13 degrees.

The chance of rain increases drastically in October and frequent, although short, showers are common.

September and early October are a great time to visit Sicily for those who do not enjoy heat and tourist crowds. The weather is still pleasant, with the additional bonus – very warm waters of the Mediterranean, which accumulated the heat after the warm summer and offer very comfortable temperature of 25-26 degrees Celsius.

The Indian summer in Sicily greets the visitors with beautiful colours of laves changing colors and the local vineyards offer the unforgettable grape harvest experience for the wine lovers.

Spring, again, is a good time for an off-season Sicily holiday, especially if beach activities and swimming in the sea are not a must. The daytime temperatures, still ‘shy’ in March, at around 13 degrees, increase to an average 20 degrees in May. Despite the 6 to 8 hours of sunshine per day, before the summer arrives, for most holiday makers the weather is not warm enough for relaxation at the beach and the water temperature far from comfortable, at around 19 degrees Celsius. The chance of rain decreases and the island prepares for the upcoming tourist season.

Easter is an interesting time to be in Sicily as the island, festively decorated, immerses in the traditional celebrations and the smell of seasonal dishes.

The nature also puts on a show during the Sicilian spring, as the fields across the island cover in yellows, reds and purples of the blooming wild flowers.

Winter in Sicily – ski in the Mediterranean
The versatility of the Sicily climate are the most evident during the winter season. While in the coastal areas even in the coldest month, January, the average daytime temperatures round 10 degrees Celsius, in the highest sections of the mountains and especially on the slopes of Mount Etna snow accumulates in significant quantities. The snow-capped peak of Etna, the tallest active volcano in Europe, dominates over the Sicily landscapes and to a great surprise of many, the Mount Etna skiing is one of Sicily winter tourist attractions.

The footage of Mount Etna skiing:

Temperatures below freezing point are usually registered only in the most elevated parts of the mountains.

December and early January see the shortest days, with an average of 9.5 hour of daylight and only 4 hours of daily sunshine hours.

Rain is frequent in Sicily between November and March, being December and January the wettest months. The rain, although frequent, usually does not last long and does not exclude sightseeing.

Winer is a great time to explore the cultural side of Sicily; there are 6 UNESCO World Heritage Sites on Sicily, amongst them the Baroque Towns of Ragusa, Catania and Modica, the Arab-Norman complex of Palermo and the Doric Temples of Agrigento.