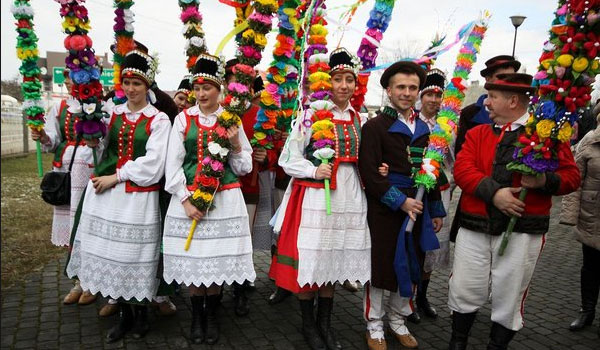 Easter is a colourful time of the year in Poland. Above, folcloric costumes and traditional decorations on the Palm Sunday.

Additionally, find a short description of the most important Polish celebrations, amongst them Christmas and Easter.Use the above list to help you plan better your trip to Poland, bearing in mind that most of the public institutions, shopping centres and a large part of tourist attractions and museums are closed on public holidays.

Christmas celebrations in Poland
Christmas time in Poland is marked by many beautiful traditions, cherished by Poles and amusing to foreigners.

Wigilia - Christmas Eve in Poland
The most important event of Polish Christmas is the Christmas Eve supper, or Wigilia. Usually preceded by strictly observed fast, the festive meal on the night of 24 of December is based on fish dishes, mostly freshwater carp, trout, pike but also herring. Other typical Christmas dishes vary depending on the region of Poland, but include delicacies as wild mushroom and cabbage stew, red borsch (beetroot soup), boiled or fried dumplings and poppy seed cake for desert.

Polish Christmas traditions
The traditional Polish Christmas table is beautifully decorated and a little bit of hay is put under the white tablecloth to remind the manger in which baby Jesus was laid. An extra plate is left on the table for an unexpected guest. The ‘breaking of the Opłatek’is another unique and beautiful Christmas tradition in Poland. Oplatek is a thin wafer-like bread shared (broken) between all the family members, together with wishes of health, joy and happiness for the upcoming year. Traditionally, the Christmas Eve will only start after the first star has been spotted on the winter sky and the oplatek has been shared.

After the supper there is time to distribute gifts left by Santa Clause by the tree or delivered ‘in person’. In December Polish children receive presents twice, also on December 6th, on St. Nicholas’ Day (in Poland known as Mikolajki) when small gifts and sweets for the youngest ones are placed under the pillow or in the shoe.

After the supper many religious Poles attend a special midnight mass service. The proper Christmas Day is spent at home, receiving or visiting family and friends.

While the days preceding Christmas, including the Christmas Eve are extremely busy for commerce in Poland, with the last-minute gift and food shopping, on both 25 and 26 of December, public life practically stops. Gas stations and small local convenience stores are the only places where, with some luck, you, will be able to buy any needed items. Large shopping malls, however, may open the cinema and restaurants areas. Please note that public transportation is available on a reduced schedule during Christmas season in Poland.

Wielkanoc - Easter in Poland
In Central and Eastern Europe Easter is probably the most important holiday in terms of religious dimension as well as in terms of unique and beautiful traditions still kept alive.

Polish Easter traditions
Wielkanoc is the Polish word for Easter. Easter celebrations in Poland last for the whole Holy Week, although only Easter Sunday and the day after are public holidays. Starting from the Palm Sunday, the cities, towns, churches, public spaces and private houses get beautifully decorated in bright colours and first blooming spring flowers, which is a nice change after the dark and gloomy Polish winter. If in Poland during Easter time, do visit any local market to see a display of traditional handcrafted Easter decorations, which include elaborate, colourful ‘palms’ made of dried flowers, crocheted tablecloths and, naturally, ornamental eggs, painted and decorated through different techniques, typical to different areas of Poland.

On Saturday before Easter day (Holy Saturday) most of the Polish families prepare swieconka a small basket, containing samples of the food (bread, meat, egg, pepper and salt). The basket are decorated with embodied cloths, flowers and Easter ‘palms’ and taken to church to be blessed during a short ceremony. Even for non-church goers, it is quite amusing to watch families parading their baskets on the streets during the whole Saturday (each church will hold several ‘food blessing’ during the day) almost as if competing whose basket is the most beautiful. According to traditions, all the food from the swieconka basket must be eaten on the Easter day. 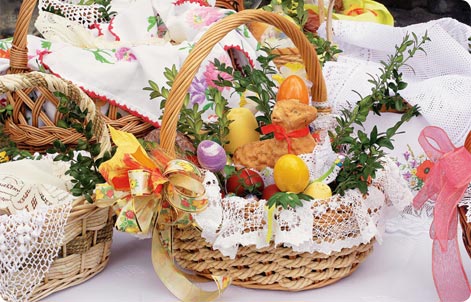 Easter breakfast
Easter Sunday celebrations start in the morning with Easter breakfast which last for a large part of the day, transforming into lunch. This is easy to understand if you consider that most of the Poles still observe strict fast on the day before. Much like in case of sharing of the oplatek at Christmas, Polish Easter breakfast will not start without sharing a piece of hard-boiled egg between the family members together with warm wishes.

Amongst the typical dishes of the Easter breakfast in Poland are hard-boiled eggs served in different forms, cold meats, including hams smoked according to traditional recipes, kielbasas, salads, horseradish and an assortment of breads. The universal Easter desert is a yeasted babka cake, mazurek cake and a pond cake shaped as a lamb to symbolize Christ.

Wet Monday in Poland
Easter Monday is known in Poland as Lany Poniedzialek, meaning ‘wet Monday’ or Smigus-Dyngus, taking its name from an old tradition according to which boys and young men in the rural areas would pour  buckets of water on girls and unmarried women. Nowadays the tradition has takes a little bit less of a radical form, but spraying water on each other is common on Wet Monday and considered to bring good luck for the rest of the year. If you happen to be on the street during Easter Monday in Poland it is very likely you will be poured water on by groups of children or sometimes even adults.

The day Easter Monday, also a public holiday in Poland is spent at home or visiting family. If the weather is good many Poles will take a stroll in a park to take a break from Easter feasting.

All public institutions, museums and large shopping centres are closed on both Easter Sunday and Monday in Poland. Public transportation operates with less frequency during those days.

The celebrations of Constitution Day in Poland include military parades, expositions, public gatherings and concerts. In Warsaw, the ceremonial change of guards take place by the Tomb of the Unknown Soldier, gathering great crowds of both locals and tourists.

Poles often combine the 3rd of May national holiday with the preceding Labour Day on the 1st of May. Should the weather allow, all families go picnicking in the public parks or travel to the countryside.

According to the Polish regulations, on public holidays only small stores run by the owners are allowed to be open, which means that you will not be able to shop in malls on neither 1st, or 2nd of May, although the shopping centre cinema and restaurant areas are usually open. In the most popular tourist destinations most of the restaurants and cafés work as normal, to cater for the needs of the imminent tourist season.

Polish Independence Day – 11 November
On 11 November Poland celebrates the re-establishing of an independent Polish state in 1918. In the course of its turbulent history, Poland disappeared from the map of Europe having had its territory divided between Russia, the Kingdom of Prussia and the Habsburg Empire during 123 years.

The highlight of 11 November celebrations is Poland is the Independence March of Warsaw, uniting thousands of participants, amongst them war veterans, famous public life figures, politicians and government members. The march takes place in the main avenues of the city centre which makes driving in Warsaw very difficult on that day.

If you are looking to shop in Poland on 11 November, you will find the shopping malls, supermarkets and chain stores closed.

Although most museums are closed on public holidays in Poland, the National Museum and the Polish Army Museum in Warsaw open on the National Day and free of charge.

Find useful information on the oficial website of the Polish Tourism Organisation.

Amongst religious celebrations in Poland common to many other Catholic countries are:

Whitsun (abbreviation of White Sunday), or Pentecost commemorating the descent of the Holy Spirit upon Christ’s disciples, celebrated on the seventh Sunday after Christmas is a public holiday in Poland. Whitsun is known in Poland as Zielone Swiatki.

The above holidays are celebrated through church services, except for the Corpus Christi, which gathers crowds during solemn processions organized in most cities and towns.

On the days of religious holidays in Poland most of the public institutions as well as large shopping areas and supermarkets are closed. Small businesses and local shops tend more and more to remain open. Also many museums and tourist attractions in Poland are open on religious holidays.