When planning your trip to Italy, keep in mind the public holiday days when your access to most of the public institutions and services may be limited, if not impossible.

Below is the list of public holidays in Italy in 2019 and 2020 and brief information on the most important celebrations in Italy. 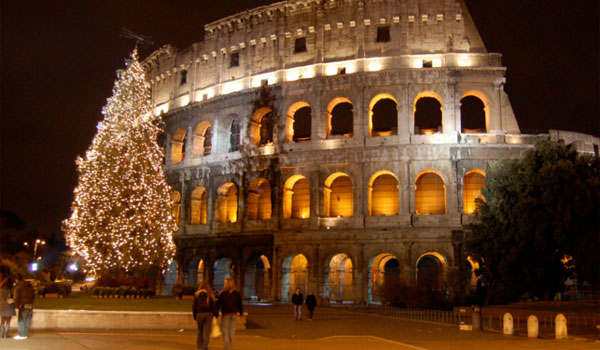 Please note, that in the most popular Italian destinations, museums and other popular tourist attractions are frequently open even during national holidays. Whenever possible, refer to the official websites for exact information on opening times.

New Year’s celebrations in Italy
The New Year’s festivities in Italy, much like everywhere else in the world, start on the night before. La Festa di San Silvestro, or the Feast of St. Sylvester on the night of 31 December is held at private parties and in public spaces. In any larger city and town there will be firework displays and in the villages traditional bonfires are held.

Italian New Year’s Eve menu includes pork and lentil dishes as well as dried fruit, symbolising prosperity in the upcoming year. Amongst the most peculiar New Year’s traditions is wearing red underwear and tossing through the windows old, unwanted items, as a symbol of a fresh start.

In Italy the New Years day is spent at home, with family and friends. Expect all the shops and restaurants to be closed for business, although in the touristy places you will be able to find an open café.

Epiphany in Italy (La Befana) - always January 6th
Although the Epiphany is essentially a Catholic celebration commemorating the visit of the Three Kings to baby Jesus in Bethlehem, in Italy it also has a popular counterpart in the form of a La Befana tradition. La Befana is a witch arriving on a broom stick to distribute gifts amongst children (to be put in socks hanged out the night before). 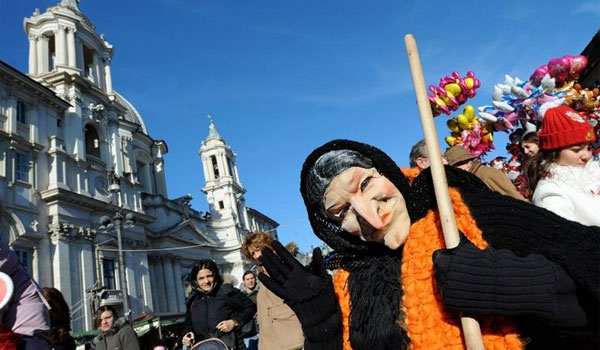 The 6th of January is celebrated by processions held in all the major churches across Italy, being the most famous one the historical processions of Vatican, Florence and Milan and by La Befana festivals, sports competitions and events. La Befana Festival in the medieval town of Urbania is a delight for both children and adults.

All of the public institutions and most of businesses in Italy are closed on January 6th.

Easter in Italy
In Italy Easter period is marked by both solemn religious celebrations and joyous festivities.

Most of Italian cities and towns hold processions during which statues of Jesus and Virgin Mary are carried through the street, often by the participants dressed in ancient costumes.

The most famous religious Easter celebrations in Italy are held in the Abruzzo region, on the island of Sicily and, naturally in Vatican.

If you are in Florence during Easter time, do not miss out on an unique folk tradition of Scoppio del Carro - the explosion of the cart - in which on Easter Sunday a decorated cart is paraded through the city to Basilica di Santa Marta del Fiore to be ignited, providing a spectacle of fireworks, to be followed by a medieval costume parade.

Easter Sunday, or Pasqua is family time in Italy, spent over elaborate traditional meals which include dishes of lamb, goat, eggs and artichoke as well as the sweet Easter bread, Pani di Pascua.

All the public and business life in Italy stops on Easter Sunday, as well as on the day after. Many Italians choose to celebrate La Pasquetta, or Easter Monday, by picnicking in the country side, weather allowing. In major towns and cities special events are held, usually including traditional games, such as egg races.

If you plan shopping in Italy during your Easter holiday, be aware that all the shops are closed on Easter Sunday and Monday.

Liberation Day, Labour Day and Republic Day in Italy
Every year on April 25 Italy celebrates the end of Nazi occupation during the World War II and honours the Italian Resistance.

A variety of events are held across the whole country, including concerts, parades and public gatherings. If you are driving in Italy on 25 April, do expect major traffic diversions in larger cities’ centres.

In a similar way are celebrated the Labour Day (or the May Day) on 1 May and the Republic Day on 2 June.

If in Rome on the 2 June, during Festa della Repubblica, do not miss out on the traditional (and quite spectacular) military parade of starting at Thomb of the Unknown Soldier and marching down Via dei Fori Imperiali to Piazza Venezia.

Ferragosto, the Assumption Day, Italy - August 15th
The Assumption of Virgin Mary celebrated in the Christian world on 15 August is essentially a religious holiday and although most of the public offices are closed on that day, in the most popular tourist locations, many museums and restaurants remain open to cater for the needs of the high-season.

In Sardinia, where the Catholic tradition is particularly vivid, a colourful Festa dei Candelieri combines the religious celebration with the folk culture, culminating in a street party and the display of fireworks.

All Saints' Day Italy - November 1st
In Italy, much like everywhere else around the world, All Saints Day celebrations have been melting with the American Halloween tradition.

In the last week of October Halloween parties and events are held all across Italy. The city of Corinaldo in the Marche region is famous as the Italian capital of Halloween, due to a three day ‘spooky’ festival including attractions as Tunnel of Fear, House of Spirits or Party of the Witches.

The typical Italian way of celebrating the proper All Saints’ Day in Italy (Tutti di Santi) is by attending religious ceremonies and visiting the cemeteries. In some areas of Italy, the seasonal truffle and chestnut fairs are organised around the All Saints' Day.

Expect most of the public institutions and business to be closed on 1 November in Italy.

In central and southern parts of Italy, massif bonfires are lit on the night before.

While all the public organizations and institutions close on 8 of December, most of the shops remain open allowing early Christmas shopping.

Christmas in Italy
Traditionally, Babbo Natale, the Italian version of Santa Claus brings only symbolic gifts on the Christmas Day, as the proper presents are distributed by La Befana on the Epiphany Day, 6 January.

Nativity crib scenes are one of the most interesting aspects of Italian Christmas tradition. Presepi, as they are called in Italian, executed to the last details recreations of the manger where baby Jesus was born are displayed in most of the churches in Italy and often in public places. The city of Naples is famous world-wide for the extremely elaborate nativity scenes, including not only religious but also historic or contemporary figures, often politicians.

In the week preceding Christmas children dressed up as shepherds go door to door signing carols, reciting poems and collecting money for gifts; a tradition that is greatly lost in larger city centres.

The Christmas Day is spent at home, with families over a large meal which includes baked pasta, salted dried cod and traditional yeasted fruit cake panettone. The Christmas feast continues the next day, known in Italy as St. Stephen’s Day.

Both 25 and 26 of December are national holiday days in Italy, with virtually no services or commerce available.

Shops reopen in the period between December 27th and 31st, but many museums and other tourist attractions may reduce the opening hours.

Be aware that car rental prices in Italy will normally increase during the holidays.