Finland is a Nordic country and part of the geographic region Fennoscandia.

The Land of a Thousand Lakes has a very scenic nature with an infinite number of forests and 185.000 lakes (hence the nickname).
The country is the 8th largest of Europe - in terms of area. The country ‘only’ has 5.5 million inhabitants, of which the majority lives in the southern part of Finland. 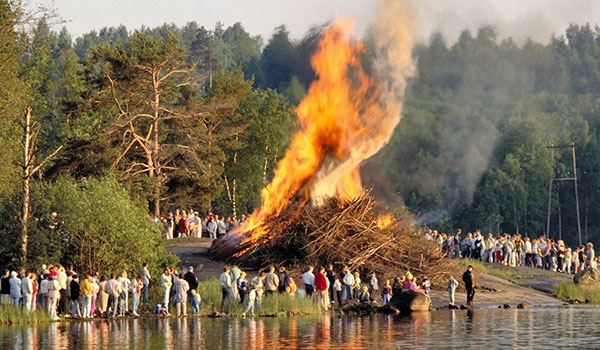 Finnish bank holidays and closing days have a lot in common with public holidays in other Scandinavian countries like Denmark, Sweden and Norway.

Read more about bank holidays in Denmark and Sweden.


Midsummer Day and Midsummer Night Finland
In Finland, the longest day of the year and the day after are celebrated with entertainment and parties far into the night.

It is very common in Finland to start the summer vacation in this weekend.

The Midsummer Holiday is a weekend for relaxing and spending time with friends and family. Many go to their summerhouses or attend one of several festivals being organised in the Midsummer weekend. It is tradition to light large bonfires in Finland on Midsummer Night.

Midsummer Day and Night always fall on the last Friday and Saturday of June - creating an extended weekend for the Finns.

The day is commonly celebrated with parades and sing-alongs despite the weather conditions - which often include heavy snow. The Finnish holiday has also become object of demonstrations. Some demonstrations are peaceful, but others can end in disagreements between the demonstrators and the police.

The Christmas Days in Finland
Christmas is the most beloved Finnish holiday and the one most celebrate. An essential part of the Finnish Christmas is the Declaration of the Christmas Peace. The Christmas Peace is officially announced at noon by a city official. The declaration is read in both Finnish and Swedish (Swedish is also an official language of Finland, even though only 5.3% of the population speak the language. They are called Swedo-Finnish or Finnish Swedes).

In the past, the Declaration of Christmas Peace was a tradition in most Nordic countries. It meant that during Christmas time, peace should prevail, and any violence committed during the time of the Christmas Peace, should be punished harsher than normally, if the peace was not kept.