The capital of Costa del Sol is an extremely versatile destination. Apart from the wonderful beaches and typical summer-time activities, the city offers a wide choice of cultural attractions and events to attend throughout the year.

The Three Kings Feast celebrating the visit of the Wise Men to baby Jesus in Bethlehem is just as important occasion in s Spain, as the Christmas Day is throughout the rest of Europe. On the morning of 6 of December Christmas gifts are distributed, though the festivities start already the night before, when processions and parades are organised in most of the Spanish cities and towns. The parades are accompanied by music and candy is thrown at the by standers from the passing floats.

Much like in any other country of a strong Catholic tradition, Carnival is time is a very joyous and colourful time in Spain. Traditionally, merry festivities, feasting and indulging into eating and drinking aims at preparing Catholics for the harsh times of the Lent.

In Malaga, the Carnival celebrations are not much different than in other areas of Spain. The over a week long celebrations, consist of parade and masquerades, as well as of a variety of accompanying events.  The king, the queen and the prince of the carnival are elected, for adults, as well as for children; dancing and best costume contests are held.

The high point of the Carnival celebrations is the ‘Burial of the Anchovy’ (also known as ‘Burial of the Sardine) during which a giant papier-mâché sculpture of an anchovy, the favourite snack of the local cuisine, is burned.

More first-hand information about Malaga Carnival, in Spanish, is available on www.carnavaldemalaga.es.

The Holy Week, culminating in the Easter Sunday are an extremely interesting time to be in Malaga, even for those alien to Catholic traditions.

Quite differently to the insightful and toned down way of celebrating the Passion Week in other Spanish, or European for that matter, destinations, Malaga puts on quite a show during this time. Multiple processions by the religious brotherhoods, baroque costumes and ornaments, lots of noise and cheering by both participants and the observers, feel in the streets of Malaga, starting from the Palm Sunday, until the Easter Sunday.

The multiple processions are organized by six religious societies which compete in creating the most impressive and most lavish spectacle.

Malaga Fair 2017
12-19 August
The greatest summer attraction of Malaga, as far as events are concerned is, without a doubt the Malaga Fair. Locally known as Feria de Málaga or, Feria de Agosto, the fair commemorates the arrival of Reconquista to Malaga and the liberation of the city from the Moors by the Catholic monarchs, Isabella I of Castile and Ferdinand of Aragon, in the 15th century.

The ‘taking of the city’ is celebrated by street parties, concerts, costume parades, flamenco shows, bull fights and theatre plays. The festivities take place during the day and at night and for the duration of the fair the city is beautifully decorated. 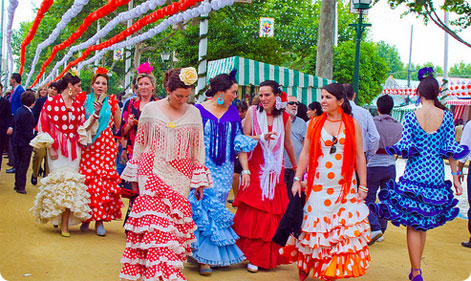 Street food is abundant during the Malaga Fair and so is the local sherry wine, fino.

Do remember, however, to drink water as well, as Malaga Fair takes place at the height of summer and daytime temperatures often round 40 degrees Celsius.

The Los Verdiales feast, celebrated every year on the 28th of December in Malaga is dedicated to the traditional local form of dance, malagueño, from which fandango is believed to have originated. The dances are accompanied by folk groups known as Panda de Verdiales.

On the next day, the families gather together for a traditional meal. Roscon de Reyes, a ring-shaped cake, decorated with crystalized fruit is eaten.