Fuerteventura attractions: what to do in Caleta de Fuste

Located on the eastern coast of Fuerteventura, Caleta de Fuste is one of the largest resorts on the island.

Situated in only a 10 minute drive away from Fuerteventura Airport (see map) Caleta de Fuste is a versatile destination, offering attractions to suit every tourist tastes.

Amongst some of the reasons to visit Caleta de Fuste are beautiful beaches, water sports, golf, aqua parks, great restaurants and a vibrant night life. Not to mention the unique natural setting and a year-round mild climate.

Should that not suffice, a number of other interesting locations is within an easy reach from Caleta de Fuste, amongst them: Puerto de Rosário, La Oliva, Pájara and Tuineje. 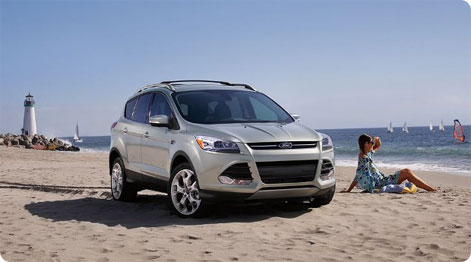 A rental car on Fuerteventura will surely enhance your holiday experience on the island. Here, an SUV Ford Escape.

See Fuerteventura climate table (temperatures and sunshine across the year).

With a population of nearly 6000 permanent inhabitants, Caleta de Fuste is one of the largest communities on the island, getting particularly crowded during the summer season, when the greatest numbers of tourist arrive to the Canary Islands. Find out, below a few tips on what to do in Caleta de Fuste, regardless of the season.

Beach and water sports
The large Caleta de Fuste beach stands out from the majority of Fuerteventura coast due to its soft, white sand, not very common on volcanic islands. The beach is man-made to a large extend and the sand was brought here in the 70s when tourism started booming in Fuerteventura. Currently (late 2016) another beach is being ‘created’ on the outskirts of town, using the sand from the nearby Puerto del Rosário beach, which is brought to Caleta by boat and pumped by pipe lines.

The sheltered, horse shoe-shaped beach of Caleta de Fuste is a perfect location for families with small children as it slopes gently into the sea and the waves near the sand line are practically inexistent.

This does not mean, however, that you will not be able to enjoy water sports in Caleta de Fuste beach. Boat trips are widely available here, as well as kayak, stand-up paddleboard and snorkelling equipment rental.

On the far end of the beach, Fuerte Fun Center offers surf classes for beginners. If you are an advanced surfer and looking for more challenging conditions, Caleta de Fuste is not recommendable; the coast of Fuerteventura, often referred to as the ‘windy island’ offers plenty of alternatives for surfers of all levels.

Some of the best hotels in Caleta de Fuste:

Castillo de Caleta de Fuste
As a fairly recent development, Caleta de Fuste does not really have a significant historical heritage. The defence tower, misleadingly referred to as castillo, meaning ‘castle’ is the town’s most recognizable historic landmark. There is not much to see inside the tower which dates back to the mid-18th century, but tourists often stop here for a photo or to visit one of the many restaurant and bars located in the Castillo/harbour area.

Urban life and restaurants on Fuerteventura:

For a historic tour of Fuerteventura, take a trip to the nearby Antigua, the capital of the district.

El Carmen Salt Pans Museum
Located just south of Caleta de Fuste, salinas or salt pans, are one of the most popular tourists attractions in the area. Inaugurated in the early 20 century, the salt pans still produce considerable amount of the ‘white gold’ as salt is often referred to.

The museum/interpretation centre adjacent to salinas explains how salt has been produced hundreds years ago, making it quite clear that the processes used nowadays in Fuerteventura have not changed that much.

The tourists of an inquiring spirit may find it worthwhile to venture a bit further away from Caleta del Fuste, inland, when extensive olive groves spread, benefitting from excellent soil and sun exposure conditions. Trips of the farm and olive oil pressing process, combined with the tasting of olive oil are very popular amongst the tourists on Fuerteventura.

Outdoor activities Fuerteventura – cycling and horse riding
For active tourists, Fuerteventura’s attractions stretch out far beyond the island’s coast and beaches. The great outdoors of Fuerteventura create perfect conditions for a variety of activities.

Cycling is an increasingly popular on Fuerteventura which is often chosen as a training location for professional cyclists and competing athletes. With the great weather during most of the year, cycling is a great, cheap and healthy way of discovering the beauty of the island.

In Caleta de Fuste you will find are several purpose built cyclepaths, as well as bicycle and protective gear rental.

Horse riding is another popular way to move across the islands. There are several stables and riding schools on Fuerteventura for beginners. Those experience in the equestrian art will find a wide choice of riding trips across the island, some of which last for several days and include camping for an even closer to nature experience.

Caleta de Fuste for children
Beach and pools are undoubtedly the major attraction for the youngest tourist in Fuerteventura. Should you need, however, a break from splashing and sand castle building, there are several playgrounds, mini golf courses and arcade games centres scattered across Caleta de Fuste. As far as water parks are concerned, the closest one is in Corralejo, in the northern part of the islands – Acua Water Park.

For extra fun visit the local aquarium, or Fuerteventura Oceanarium:

Open year round, the Oceanarium provides a wide choice of activities, including interaction with dolphins and sea lions, a submarine experience, high sea fishing, catamaran trips and kayak rental.

North of Caleta city centre you may also visit a rather unusual attraction: the Dream House Museum is a paradise for model builders, both children and nostalgic adults.