Facts about the weather in Malta

The weather in Malta is the epitome of a typical Mediterranean climate. The climate in Malta, south of Sicily, is characterized by hot and mild summers, and slightly rainy winters.

Like in the other islands or archipelagos – the Maltese archipelago consists of three large islands (Malta, Gozo and Comino), as well as a number of uninhabited islands – the local climate is formed by the influence from the sea. That means small amplitudes of daytime temperatures and a total lack of extreme heat or cold.

Summer in Malta – climate like Southern Italy and Southern Greece
For people who cannot stand temperatures higher than 30°C, June is the perfect month to visit Malta.

Daytime temperatures remain at 23-25°C in the summer. The sun shines for about 10 hours per day and the water temperature is already above 22°C.

In July and August, the water temperature will reach 26°C, however, the increase of temperature, sometimes up to 30°C and sometimes even a bit more, should also be considered. In periods of high humidity, 30-degrees temperatures may not be well-tolerated by some tourists.

Truly uncomfortable and uncharacteristic high temperatures can only be found in Malta with the occasional summer sirocco wind, which can blow in from northern parts of the African continent. The sirocco carries with it masses of hot and very dry air and sometimes also sandstorms. The sirocco/scirocco is also referred to as the xlokk wind in Malta.

For the large majority of days, Malta climate is sunny. The sun shines for up to 12 hours per day in summer, whilst it almost does not rain in July and August.

Furthermore, the coasts of Malta and Gozo are blessed with a pleasant cold breeze, so even very hot weather in Malta does, usually, not feel in any way uncomfortable.

Find more details about the weather in Malta.

Although spring is slightly cool in its early stages, it is an extremely pleasant period on Malta. The island is covered with lush greenery and blooming wild flowers. 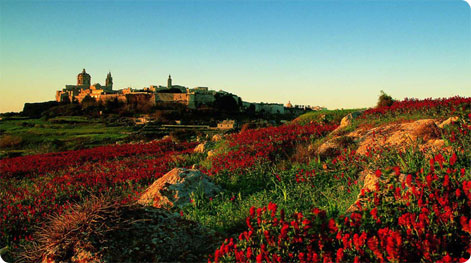 Autumn throughout all of September and sometimes also into the first half of October, gives memories of a warm summer. In September, the temperatures on Malta are between 25 and 28 degrees, while the water temperature is around 26°C.

Swimming and water sports activities are also possible in October, despite the slightly cooling of both water and air temperatures. The average temperature of the waters surrounding Malta, Gozo and Comino is 20 degrees all year round; the highest in Europe. Above average water temperatures (more than 20 degrees) are reached between June and November.

Come November in Malta, residents and visitors are reminded about the approaching winter by the still pleasant water temperature dropping below 20°C.

Malta winter – climate in a typical Mediterranean country.
The winter Malta climate is very mild with average temperatures between 13 and 14°C in December and February (December is the warmest winter month).

The main determinant of this season is the increased rainfall as the number of  days with rain increase in December.

As the temperatures on Malta only occasionally fall below 10°C, snowfall at this archipelago is an extremely rare occurrence.