First time visitors to Portugal may easily get confused by the motorway toll system. While using the traditional, manned toll gates is simple (although in many cases time-consuming) a large portion of the Portuguese tolled road network works on an electronic basis. In this case, modern does not necessarily mean user-friendly.

The electronic toll system was implemented in 2010 on the motorways formerly referred to as SCUTS and now, ex-SCUTS. The payment method for using those roads and the traditional motorways differ considerably, especially from the point of view of a foreign registered car owner.

What are ex-SCUTS?
The name SCUT derives from the Portuguese Via Sem Custos Para o Utilizador which translated directly means ‘road without cost for the user’. It described a road infrastructure model in which a private operator is responsible for building and maintenance of a segment of the motorway in exchange of the right to explore commercially this segment. It would have the exclusivity  for all the along-road businesses concessions (gas stations, restaurants, etc..).

This model, which permitted to maintain the motorways in question free for the users, ceased to exist in October 2010.

The Portuguese State become directly responsible for the maintenance of the motorways and tolls were introduced. Since, in most cases, the existing infrastructure did not allow installing physical toll booths, the new operator - the State - opted for installing electronic an electronic toll system which recognizes the number plate and/or connects to the Via Verde device inside the car.

Via Verde is the Portuguese electronic toll collection system which allows to match the transponder in a vehicle to a bank account for an automatic payment. 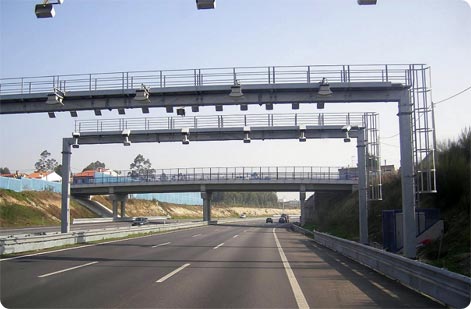 Electronic tolls in Portugal. Roadside signage will alert you to the fact you are approaching an electronic toll gate. See the sign below: 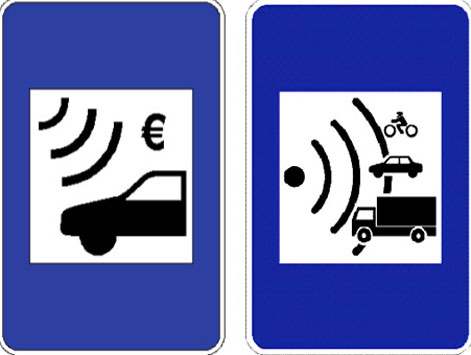 The majority of electronic toll motorways in Portugal are located in the North. The Via do Infante, running along the coast in the southern region of Algarve is the major exception and often a source of frustration for foreigners on self-driven holidays in Portugal.

Whenever a Portuguese-registered vehicle equipped with a Via Verde device passes through the electronic toll section, the payment is carried automatically. Via Verde transponders are matched with a particular vehicle and non-transferable. This rule does not apply however to rental vehicles  - read further below.

The drivers of the Portuguese-registered cars who do not own a Via Verde device depend on a far less convenient solution. The payment for the tolls, increased by an administrative charge, must be carried at a post office (in Portuguese: CTT) or a PayShop agent, by identifying the vehicle’s number plate.

The scheme of payment dates is fairly complicated: it is only possible to pay two days after using a tolled road (which is the time needed for the post office and PayShop systems to gather the necessary information) but no later than 5 work days after the car’s number plate has been registered in the system. Failing to pay on time results in a fine mailed directly to the vehicle’s owner. Ignoring that fine lead to a tax execution proceedings.

It is fairly easy to use, once the foreign car owner has registered in the system which connects the number plate to a credit card. The registration can be done in an EasyToll booth. The booths, clearly marked with a ‘foreign vehicle’ sign can usually be found at the service stations at the entry points to the electronic toll road segments.

When the credit card and the car registration number are inserted in the EasyToll terminal, the number plate is registered in the system and whenever the car passes a sensor on the electronic toll road, the toll is automatically charged to the user’s card.

The sign up costs €0.60+VAT and each journey is increased by the administrative fee of €0.26+VAT.

The sign up is valid for 30 days and the ticket emitted must be kept as a proof of payment.

TollCard
Some visitors to Portugal may find it more convenient to purchase a prepaid TollCard, with a fix amount to be spent according to needs. The cards, with the value of €5, 10, 20 or 40 can be purchased at post offices, at the service areas or directly at the operator (www.tollcard.pt).

After purchasing, the card requires activation via SMS. Follow instructions on the card to send a code (individual for each card) and the license plate of the vehicle.

The card is valid for e period of 12 months after activation. Several cards can be associated with one vehicle.

The actual cost of the tolls paid via TollCard is the same as in the case of EasyToll: the value of the tolls plus €0.60+VAT for activation and €0.26+VAT administrative fee for each journey.

TollService
For visitors on a weekend trip to Portugal, who plan to drive a lot within the electronic toll motorway system, the TollService card may be the ideal solution. This prepaid card, at the cost of €20 allows unlimited use of electronic tolled roads for 3 days.

Also, keep in mind that the electronic toll motorways in Portugal are heavily monitored by the road police. Foreign registered vehicles are likely to be stopped and if they lack a Via Verde device or fail to prove they are registered within the EasyToll system, heavy on the spot fines are likely to be issued.

Via Verde device in a rental car
Most car rental companies in Portugal offer the possibility to rent a Via Verde transponder, for a variable daily rate.

It is also possible to rent the device directly from Via Verde operator. The temporary device is known as Via Verde Visitors and has to be linked to a bank account for direct debit. The cost of the rental is €6 for the first week and €1.5 for every following week. A refundable deposit of €27.50 is required. The current balance of the Via Verde account can be verified online, through the operator’s website.

An undeniable advantage of having the device is the possibility of using the priority green lanes when crossing the toll gates, which in certain parts of Portugal may get very crowded at times.