Although Easter is one of the most important holiday seasons in Sweden, its celebrations are less exuberant than in other European countries. Sweden is a largely secular nation and religious manifestations do not play great role in public life.

Much like elsewhere, Easter is inherently related to new life and egg is its main motif, both as a part of the holiday menu and as a decorative element. 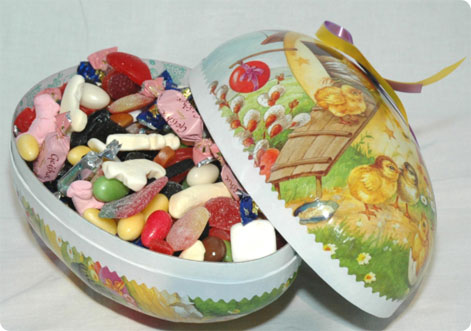 On Easter Swedish children receive an egg filled with candy.

Swedes rarely visit church on Easter and focus mostly on spending quality time with family and friends. Easter work-free days can be used to travel out of town, to the summer houses or into the wild, to reconnect with nature, or on more mundane tasks such as spring cleaning.

See the calendar of public holidays and work free days in Sweden.

Swedish Easter decorations
Easter is a joyful time in Sweden. An improvement in weather conditions – warmer and longer days usually experienced at this time of the year – remind of the arriving spring and inspires good disposition. Even strangers will greet each other with wishes of happy Easter – Glad Pask in Swedish and both public venues and private houses are decorated in cheerful colors.

A common element of Easter decoration are tree branches or twigs adorned with colourful feathers, seen in practically every household. 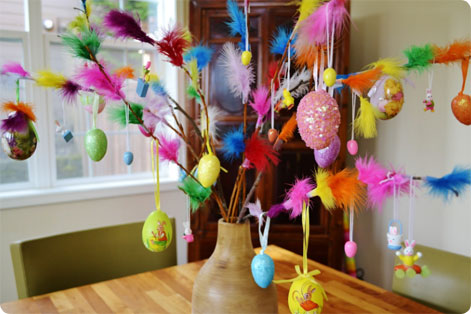 Brightly coloured feather on still barren branches are a promise of soon-to-arrive Spring.

Påskris, because this is how the Easter branches are known, are the equivalent of the Easter palms which symbolize the arrival of Jesus to Jerusalem. Some use the birch branches to playfully ‘whip’ others. This gesture also derives from the Christian tradition and in particular the martyrdom of Jesus during the Way of the Cross, although nowadays not many wonder about its origins and meaning.

Another important element of Easter celebrations in Sweden is painting eggs. The traditional way of decorating eggs consists of dying them with natural ingredients, for example, by boiling them with onion peels. Grain ears and herb twigs are attached to the egg soaking in the onion dye to leave natural patterns on its shell. 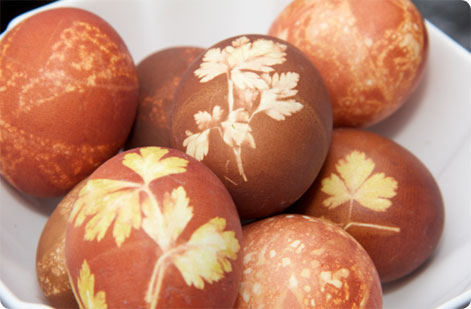 What’s on the table?
Swedish day-to-day is fairly simple so Easter and Christmas are an occasion to indulge in sumptuous meals with elaborate dishes, rarely encountered outside the holiday season.

Apart from eggs, prepared and served in a variety of ways, salmon, herring, lamb roast and the famous Swedish meatballs, köttbullar, are another staple of the Easter menu. A casserole of potatoes onions and anchovies, known as Janson’s temptation, Janssons frestelse is very popular too.

Despite having, in general, a well-balanced diet during the rest of the year, at Easter time Swedes show their sweet tooth. Apart from a chocolate cake and semla buns filled with whipped cream and marzipan, the Swedish consume large quantities of candy, gummy bears and chocolate bunnies. 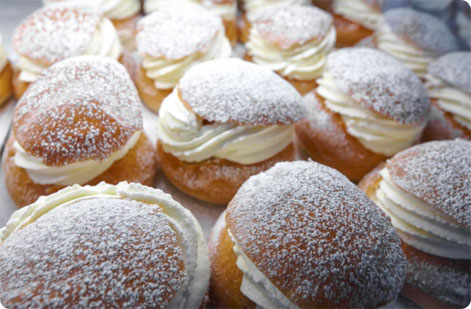 Semla, a sweat wheat bun can be served in many ways. Its seasonal, Easter version is filled with marzipan cream.

Swedish Easter witches
Although apart from seasonal decorations and menu, Sweden does not have many Easter traditions, one of them is particularly curious yet on the same time charming, as it concerns children.

Deriving from the pagan belief in witches travelling on broomsticks to dance with the Devil on the legendary meadow Blåkulla, on Maundy Thursday Swedish children and especially girls, dress up as witches and go knocking on doors asking for treats, much like American children do on Halloween. 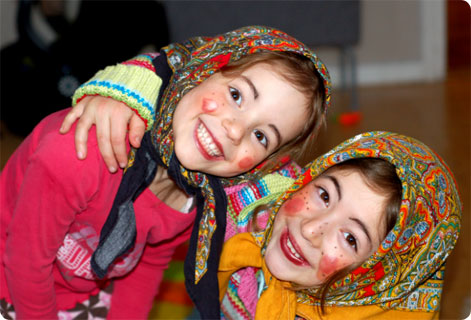