Malaga is the unquestionable tourist capital of the Andalusia region in southern Spain and the real gem of Costa del Sol, the Andalusian coast of the Mediterranean.

See Málaga on the map of Andalusia.

Apart from stunning beaches and popular holiday resorts, Malaga offers an amazing array of tourist attractions: numerous museums and art galleries, fascinating historic sites, excellent restaurant and animated night life. And if that should not suffice, a wealth of tourist attractions is available within a short drive from Malaga.

Amongst the unique tourist attractions of Malaga is the Picasso Museum, gathering many works of the Malaga-born painter. 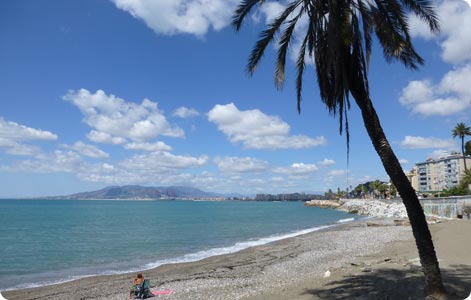 Travelling to Malaga - car rental in Costa del Sol
Malaga is the main gateway to all the tourist traffic to Andalusia.

The access to the city is possible through a broad choice of international routes to Malaga Airport, by train, including the Spanish speed-train service AVE, and by road – two major motorways of southern Spain intersect in Malaga: the A7 along the coast from Gibraltar to Barcelona and the A45 to Cordoba.

Visitors to Malaga who would like to continue their journey in a rental car, will find Malaga car hire services in several convenient locations: at the airport and in the city centre.

Frequently, the prices of car rental from Malaga Airport are slightly cheaper than the same vehicles available in the city locations. In order to find best Malaga car hire deals use internet search engines, such as Cartrawler Spain, to compare prices of rent a car services in different suppliers and in different locations.

Watch a Malaga travel video focusing on the traditional gastronomy of Southern Spain:

Costa del Sol East - the Eastern Costa del Sol (beaches)
The eastern part, stretching east from Malaga, towards Almería is fairly little developed for tourism. Although tourists will find fewer beaches on Eastern Costa del Sol, compared to the West, a trip along the ragged cliff coast is a real treat for the beautiful scenery of both Mediterranean Sea and Sierra Amlijara mountain range.

The most interesting part of this area is Nerja (see map of Nerja city centre) and the complex of impressive caves, Cuevas de Nerja. Read more about Nerja Caves.

The tourist infrastructure is extremely well developed in this part of the Andalusian coast and some of the most popular holiday resorts in Spain are located in once quiet fishing villages.

Among the tourist hotspots of the western Costa del Sol, apart from Malaga itself, are: Torremolinos, Benalmádena, Fuengirola, Marbella, Puerto Banus and Estepona.

All of the above mentioned resorts are located within a short (and pleasurable) drive distance from each other and very frequently the tourists in Costa del Sol choose hop from one beach location to another returning to their hotel only at the end of the day.

The western Costa del Sol is what most Northern European tourist associate with the concept of summer holiday in southern Spain, offering many beautiful beach locations and a vibrant city life to be enjoyed after the day of relaxation on the beach. 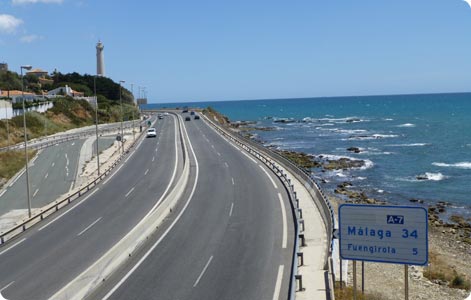 A-7 coastal road (Autovia) on the way from Marbella to Fuengirola, Torremolinos and Malaga. © Photo: Find-cheap-car-hire-co.uk

Taxis in the tourist spots of the Andalusian coast are plentiful, modern and air conditioned. However, if used regularly, the taxis in Costa del Sol tend to be rather expensive. The taxi fare between Málaga and the closest resort of Torremolinos ranges between £15-20 in the high season, but the trip in a Costa del Sol taxi from Malaga to Marbella will cost already about £50, one way.

For comparison: the cheapest Malaga car hire offers can be found with prices starting from around £130 for a 7-days rental of a small city car (Peugeot 107 or similar), allowing you to move freely between all the fascinating places of Costa del Sol for a fairly reasonable price.

Explore Andalusia in a hire car - driving distances from Malaga
Malaga, due to its location within Andalusia and good transportation links, is an excellent base for exploring the whole of the region. 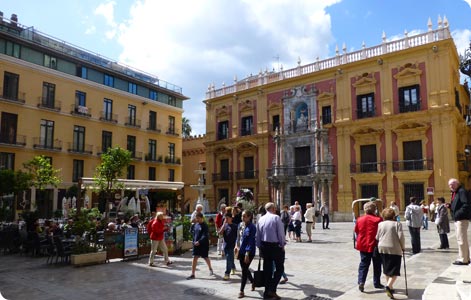 When on holiday in Malaga, do not miss out on the diversity of Andalusia extending beyond the stunning beaches of Costa del Sol. Get familiar with the unique cross-cultural historic heritage of Granada, Seville and Cordoba. Take in the mesmerising view of Africa across the Strait of Gibraltar. Try the different specialities of Andalusian cuisine: tapas, gazpachos, jamones, guisado Mediterraneo and the Jerez wines. Take a break from driving and try many wonderful hiking trails in the natural parks of Andalusia: Sierra de las Nieves, Sierra Nevada, or Los Alcornocales.

Although organized tours to the places of interest in Andaluzia can be arranged for in most of the hotels of Malaga, a hire car gives you an incomparable freedom of travelling and af lexibility to decide how to best spend your time in this fascinating region of Spain.

Find below approximate road distances from Malaga to the main places of interest in Andalusia:

See below a video guide to splendid medieval monuments of Andalusia:

Malaga weather - when to visit?
Warm Mediterranean climate is one of the key ingredients of Malaga’s success as a holiday destination.

With the warmest winter in Europe and 300 days of sunshine Malaga can be visited with nice weather conditions practically all year round.

Summer in Malaga
The summer season in Malaga, on Costa del Sol, last from early June until late September.

During this period the temperatures reach well above 25 degrees Celsius, exceeding 30 degrees in July and August. In the summer time rain fall is practically non-existant in Malaga.

Although, for most of the time the breeze from the sea attenuates high temperatures, occasionally a hot, dry wind, Sirocco, blowing from Sahara can bring an extreme heat and bother the holidaymakers with a dust haze.

Malaga spring and autumn - off-season holidays in sun
There are several advantages of visiting Malaga out of the strict tourist season. Apart from avoiding heavy crowds and inflated prices of virtually everything in July and August, the weather remains pleasant in both spring and autumn weather in Malaga. Especially if compared to the English summer.

The air temperature in Malaga exceeds 20 degrees from late March till November, although in the evening an extra piece of clothing may be necessary.

As for the water temperature: in early spring the Mediterranean in Malaga area is still rather chilly for most bathers. In autumn, however, after the long, hot summer, the sea temperature remains comfortable until mid November.

Sea water temperature in Malaga throughout the year.

In Autumn expect rainfall in Malaga, the most intense during the month of November.

Winter in Malaga, Costa del Sol
The tourist business slows down considerably during winter in Malaga, although does not stop entirely. The mixture of sunny weather and temperatures around 13 – 15 degrees Celsius and cool rainy days still attracts tourists to Andalusia, especially northern Europeans.

The very affordable prices, however, make up for the rather unpredictable wintertime weather in Malaga.

Torremolinos
Located approx. 9 miles south west from Malaga, Torremolinos was the first holiday resort to develop on a big scale on Costa del Sol. Having grown to be practically a suburb of Malaga, Torremolinos today is very well liked by the Spanish holidaymakers, however also the foreign tourists will surely appreciate its lively atmosphere and the diversity of activities available. Although Torremolinos is a very urban location, with a coastline marked by a high-rise architecture, the beaches in this area are remarkably clean. Amongst the most popular beaches of Torremolinos are: Playa de Bajondillo, Playamar, Playa Los Alamos and La Carihuela.

Benalmádena
Just next to Torremolinos, in less than 2 miles distance, lies Benalmadena. This coastal town, characterised by a relaxed, laid back atmosphere is very popular amongst British people, both tourists and full or part-time residents in Spain. Many British families own holiday houses in here. Belmadena can be divided in three main areas: the Pueblo - an old village centre, Arroyo de La Miel – a rapidly developing modern town centre and Benalmadena Costa – the coast line where most of Benalmadena hotels, as well as the state-of-the-art marina are located.

Fuengirola
Fuengirola, situated 18 miles southwest of Malaga is another greatly ‘internationalized’ location of Costa del Sol, with many British and Scandinavian residents. Tourists are drawn to Fuengirola by its excellent beaches as well as by the modern, cosmopolitan city life. 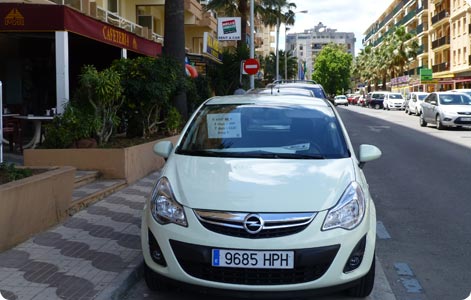 This, by far, most upmarket location of Costa del Sol is frequently compared to the French St. Tropez. Marbella boasts several luxury hotels, as well as casinos, clubs and world class facilities for tennis golf and all kinds of water sports.

Puerto Banus, west of the town centre is the most prestigious location of Marbella and a home to a yacht marina, designer boutiques and busy nightlife.

Estepona
For a completely different vibe, it is worth to drive a little bit further, to Estepona, some 50 miles southwest of Malaga. Not many other locations on Costa del Sol have managed to remain so much of its original character and charm. Some of the most traditional Andalusian cuisine, as well as crafts is available at every corner of the narrow, cobbled streets of Estepona and at very affordable prices. Out of the town centre, quality hotels, restaurants and leisure await tourists in Estepona and only a short drive is needed to reach one of the areas of greatest natural beauty in Andalusia, the Los Alcornales Natural Park.