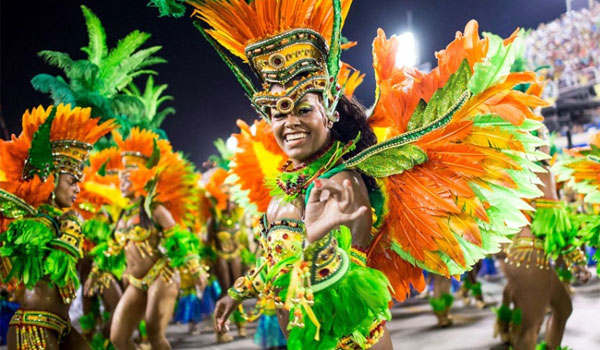 Carnival is the most festive holiday in Brazil.

Eight holidays are common to all of Brazil. See below the list of public holidays / bank holidays in Brazil in 2019 and 2020.


Carnival - a public holiday in Brazil?
Although Carnival is not declared by law a public holiday, it is common that employees are granted a day off on a Tuesday preceding the Ash Wednesday, which is the proper Carnival day. In some municipalities also Monday is a work-free day, allowing full four days of celebration. In 2019 Carnival is celebrate between 28th of February and 5th of March and in 2020, between 21st and 26th of February.

Carnival, together with some other religious holidays not declared general public holidays, is considered optional holidays (or ponto facultativo); the employers are free to consider it a day off, or not. The ponto facultativo days are, however, work free days for public employees.

Besides Carnival, other holidays considered optional, yet commonly celebrated in most of the Brazilian states are Good Friday and Corpus Christi.

Federal holidays Brazil
In addition to the nationwide public holidays, Brazil celebrates also a large number of federal holidays of religious, ethnic or social character. Furthermore, according to the law, every municipality in Brazil may declare up to four holidays, which makes it very difficult to list all of Brazil work free days. Below is the list of federal public holidays in some of the Brazilian states.

Bahia public holidays
2 of July is a public holiday in the state of Bahia, commemorating Independência da Bahia – Bahia’s independence from the Portuguese colonial empire.