The calendar of public holidays in Principality of Andorra resembles greatly those of other European countries of the Catholic tradition. Out of the 15 holidays celebrated in the principality only 4, however, are general and result closing of the businesses. Those are: the New Year’s Day, the Constitution Day, the Feast of Our Lady of Meritxell and Christmas.

Such a reduced number of work-free days in Andorra has to do with the fact that the economy of the principality which depends greatly on tourism, simply cannot afford too many closing days.

Although popular as a ski destination, Andorra has plenty to offer also in the summer season.

National Holiday Andorra
The national holiday of Andorra on September 8th is dedicated to the principality’s patron saint, Our Lady of Meritxell.

According to the legend, in the 12 century a statue of Virgin Mary was found by villagers from Meritxell next to a blooming, despite the winter weather, rose bush. The statue was moved to a nearby church yet the next day, inexplicably, it appeared again in the same location next to the rose bush in bloom. After several reappearances of the statue, the villagers considered it a sign from God that a chapel to house the statue should be built in Meritxell.

The original statue and chapel were destroyed in the late 70s and a replica was placed in the new Meritxell Chappel.

The Day of Our Lady of Meritxell is celebrate through a series of religious ceremonies which start with a pilgrimage to the Mritxell Chappel, followed by a solemn mass. After the mass there are traditional dances and choir concerts. 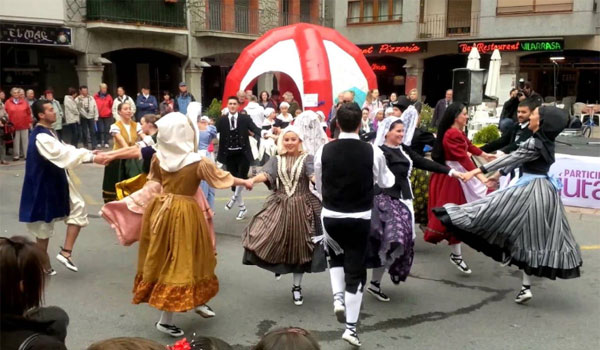 Folkloric dances during Our Lady of Meritxell feast in Andorra.

The festivities continue after sunset, with the procession of torches around the Meritxell sanctuary which was declared a minor basilica in 2014 by the Pope Francis and is one of the most popular tourist attractions in Andorra.