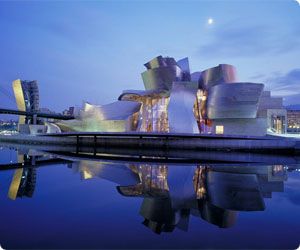 Bilbao Airport is the main airport of the autonomous Basque Country in northern Spain. With the inscreasing number of tourists arriving to Bilbao, especially since the inauguration of the splendid Guggenheim Museum (picture), the outdated existing airport facilities was replaced by a new main terminal building.

Famous for the original design by Santiago Calatrava, beautiful and unpractical at the same time, Bilbao Airport consists of two symmetrical wings, resembling a dove, for which it is frequently called "La Paloma" in Spain.

A hire car is a popular solution for many visitors to the Basque Country, as car hire is rather inexpensive in Bilbao if you don't choose to travel to Spain at the peak of the high season. You can enjoy the pleasant September weather of nothern Spain in a rental car of the economy class (Ford Fiesta or similar) for as little as approx. £ 88 for a week car rental in Bilbao.