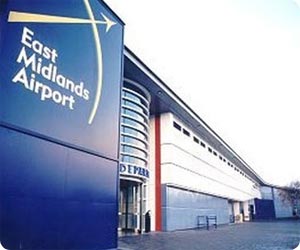 East Midlands Airport is located in one of the most densely populated areas of the UK, serving the counties of Derbyshire, Nottinghamshire, Leicestershire, South Yorkshire and Staffordshire. The cities of Nottingham, Derby and Leicester are less than 30 minute drive from the airport; Birmingham and Sheffield can be reached from East Midlands Airport in about an hour, by road.

Amongst major airlines at East Midlands Airport are the low-cost carriers, Ryanair and Jet2. The airport offers also a large selection of charter flights to popular tourist destinations in southern Europe.