The regulations regarding use of winter tyres vary a lot within the European Union, from being mandatory during the whole winter season in some countries, through obligatory on some roads, to recommended only, in other EU states.

In order to increase the road safety, Polish authorities are working on a new law regarding the use of winter tyres. As of early 2016, the new rules have not come into force and the generic guidelines for winter driving in Poland are as follows:

All season tyres
Although the weather in Poland, much like in the rest of Europe, has proved less predictable, with winters arriving later than in previous years, the season-appropriate tyres are still very popular. In a recent inquiry regarding the type of tyres used by Polish drivers, nearly 80 % of respondents declared they change the tires for the winter ones. Only 5 % admitted using summer tyres all year round. 2% of the respondents were unable to indicate which type of tyres they had fitted on their cars, while 13% indicated the use of all-season tyres.

The latter type of tyres is still not very popular in Poland, despite the obvious commodity of not having to change them once a year and to store the currently not used set. This is due to the fact that all season tyres  do not match the performance of season-appropriate tyres. A compromise on the level of material and technology used takes a toll on the parameters of the breaking distance, handling and grip on the road surface. All-season tyres also wear out quicker than proper season tyres.

Please note that tyre manufacturers have come up with a variety of products in order to accommodate the needs of the customers. The so called M+S tyres (“mud and snow”) although facilitate driving in wintry conditions, are not proper winter tyres. In order to be approved for driving in winter weather conditions, apart from the M+S marking on the sidewall the tyres must also have a sign of a three peak mountain and a snowflake symbol. See image below: 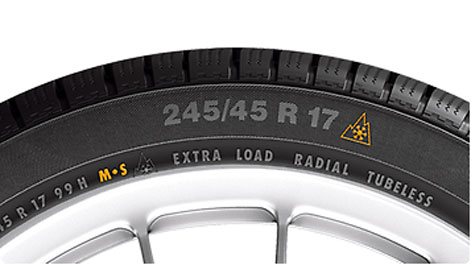 Use of snow chains in Poland is mandatory only when indicated by relevant signs: circular blue background with an image of a wheel assembled with chains. This regulation is annulled by a similar sign, crossed with a red line

It is recommended to carry snow chains when driving in Poland in winter condition, especially in mountainous areas. Remember, however, that the use of snow chains is restricted only to roads with snow and/or ice cover. Most car hire companies in Poland offer snow chains as optional winter equipment.

Related articles about driving in Poland: