List of countries with Left-Hand-Side driving - where do you drive on the left side of the road?

Which countries drive on the left side of the road?

Apart from the UK, the Republic of Ireland, Cyprus and Malta, countries with left side drive are situated mainly in the Far East, Africa and Australia/Oceania.

In Africa, measured by population, South Africa, Tanzania and Kenya are the most populous drive-on-the left countries. 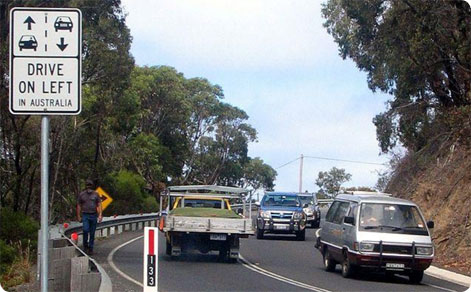 In Australia motorists drive on the left - and use kilometres (as opposed to miles in the UK).

In the Far East, Japan is by far the largest marked for RHD (Right Hand Drive) cars - as you drive on the left side of the road in Japan just as you do in Britain.

Please find below the comprehensive list of countries which drive on the left.

Should we have forgotten a country, please let us know at support@find-cheap-car-hire.co.uk.

List of left-hand-side driving countries in Africa
In terms of numbers of larger populous countries, Africa is the continent, where driving on the left side of the road is most common.

Also, the road network, in many African countries, is less developed. A country may be large in terms of square miles and population, but small in terms of road-miles (road network).

You drive on the left in the following countries in Africa:

Most African countries where you drive on the left side of the road are former British Colonies with the exception of Mozambique, which until 1975 was a Portuguese colony.

Curiously, the other large, former Portuguese colony in Africa; Angola, has right-side-drive as, indeed, in Portugal itself.

In almost all countries where one drive on the right-hand side of the road, the cars sold in the country are built as Left-Hand-Drive (LHD) so that the driver will situated on the left-hand side in the car. In this way, the driver is close to on-coming traffic.

Conversely, driving a Right-Hand-Drive car (as in the UK and in countries listed in this article), driving on the left-hand side of the road will normally imply that the driver’s seat is on the right-hand side of the car (in a RHD car). And the driver will, again, be situated close to oncoming traffic.

The following Asian and Far East countries all drive on the left side:

On the Dagen H in Sweden the 3rd of September 1967 (H-Day), traffic changed from driving on the left side to the right side. The right-hand traffic diversion was relatively problem-less and aligned Sweden with the rest of Europe. In particular, it made cross border traffic to Finland and Norway easier.

The traditions for driving in different sides of the road can be traced back to when horse riding was the preferred way of transport in the UK.

On a horseback, the sword would often be situated on the right side (as most gentlemen would operate the sword better with their right hand). Therefore, it became custom to ride on the left side on the road in the UK in order to be able to greet on-comers or, if needed, use your sword against them with your right hand.

In The States, however, riding on horseback was less common. Here the horse-drawn wagon was the preferred way of transport, and you would want to use your best hand (the right hand) to operate the whip at your horses attached to the wagon.

Some drivers would actually sit on one horse and whip the other horses, and it proved more practical to sit on (one of) the left side horses and use the whip with your right hand whilst keeping an eye on oncoming traffic on your left.

Driving in the right in America - see more on Quora.

Britain expanded its colonial rule and its traditions including the British Imperial measurement units to all parts of the world. Due to the British expansion, more countries introduced driving on the left.

Curiously, some former British Colonies have reverted, notably Canada, which changed to right side driving in the 1920’s in order to ease border crossing to the US.

In other European countries, for instance in Denmark, driving on the right was already introduced as early as 1758. It points to the fact that Napoleon Bonaparte (born in 1769) of which Denmark became an allied, most likely had nothing to do with the early right-side-driving habits in Continental Europe.