After publishing news of the deal worth €550 million in June 2017, Europcar expects the latest acquisition will be finalized by late 2017 subject to usual procedures and approval by competition authorities.

Check out the low cost rates at Goldcar

Goldcar is a medium size car renter with focus on the leisure market. The cars are offered on its own web sites (including Rhodium), but the majority of cars are rented through online price comparison sites.

In the ownership of Italian company Investindustrial, Goldcar reported sales of €240 million in 2016 and operating profit of €48 million. 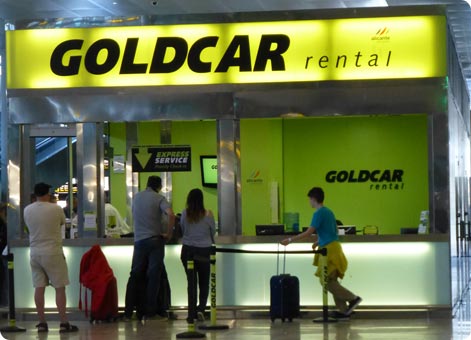 Lots and lots of customer complaints over Goldcar – but bookings keep coming in. Goldcar office in Alicante Airport © Photo: Find-Chep-Car-Hire.co.uk

High price for Goldcar
Goldcar has been executing one of the most aggressive European expansions known in the industry in Italy, Portugal, France, Croatia, Greece and Romania.

Standard prices for rentals have been slashed in order to come across as the cheapest car hire option on the market.

At the same time, Goldcar has inundated customers with extra charges for almost anything imaginable on high volume destinations like Tenerife, Majorca Airport, Gran Canaria, Fuerteventura and more.

The expansion to Italy and France has been done in pretty much the same fashion; although the fierce competition and policy of charging additional hidden fees has been especially noticeable in the Spanish Islands as well as in Spanish high volume Alicante Airport and Malaga Airport.

A considerable part of the Goldcar profits come from upselling the customers additional excess insurance (Cobertura Super Relax). The sale of these insurance deals have been highly controversial with Goldcar frequently being accused of cheating customers and forcing holiday makers to take out unwanted and very expensive excess insurance.

Cobertura Super Relax can easily cost an additionally €100-200 for a 1-2 week holiday, depending on car class and destination, which in many cases has been more expensive than the rental itself.

The purchase price for Goldcar paid by Europcar, when the final approval is given, can be seen as high for a company which, probably, is not earning anything on its core service of renting cars.

Low cost car hire with Goldcar
If you bring a VISA or MasterCard credit card, you can avoid the Cobertura Super Relax, but be sure the credit card is a ’real’ credit card and with sufficient available funds as Goldcar will force the insurance on any customer who cannot have the security deposit blocked on his or her credit card. Security deposits at Goldcar are amongst the highest in Europe frequently exceeding €1500.

At Goldcar, expect to be charged extra for ’fuel service’ without asking for it. The fuel service fee in summer 2017 reached the eye watering amount of €44 for renting a VW Golf in Alicante Airport.

If you are so ’lucky’ to be supplied a diesel car from Goldcar, the company will charge you €2 extra per day for the pleasure of diesel; also without the customer asking for a diesel in the first place.

Conclusion: Goldcar is cheap, but there is always a catch
The rates for renting a car with Goldcar are, often, very low.

However, always read the small pring meaning all terms & conditions meticulously before renting a car with this company.

Our experience at www.find-cheap-car-hire.co.uk is that if something is unclear in the Goldcar terms & conditions, walk away, find another offer, preferably from another supplier. Goldcar is notoriously known for always charging the customer way more than the customer expects.

Due to low list prices, also expect a considerable waiting time in front of the Goldcar counters in virtually all major airports in Southern Europe. Part of the extensive queuing at Goldcar stems from the delays from many heated arguments between customers and Goldcar staff.

Should you have a small damage on your Goldcar vehicle, expect to be charged heavily – and therefore, it is always a good idea taking extensive photo documentation inside and outside any Goldcar rental cars, before setting off. For naive customers, considerable bills can be waiting unless you keep Goldcar on a very short leach.

At Find-Cheap-Car-Hire.co.uk we have never experienced any rental car company with as many complaints as Goldcar (including Goldcar owned Rhodium). Goldcar is, truly, in a league of its own.